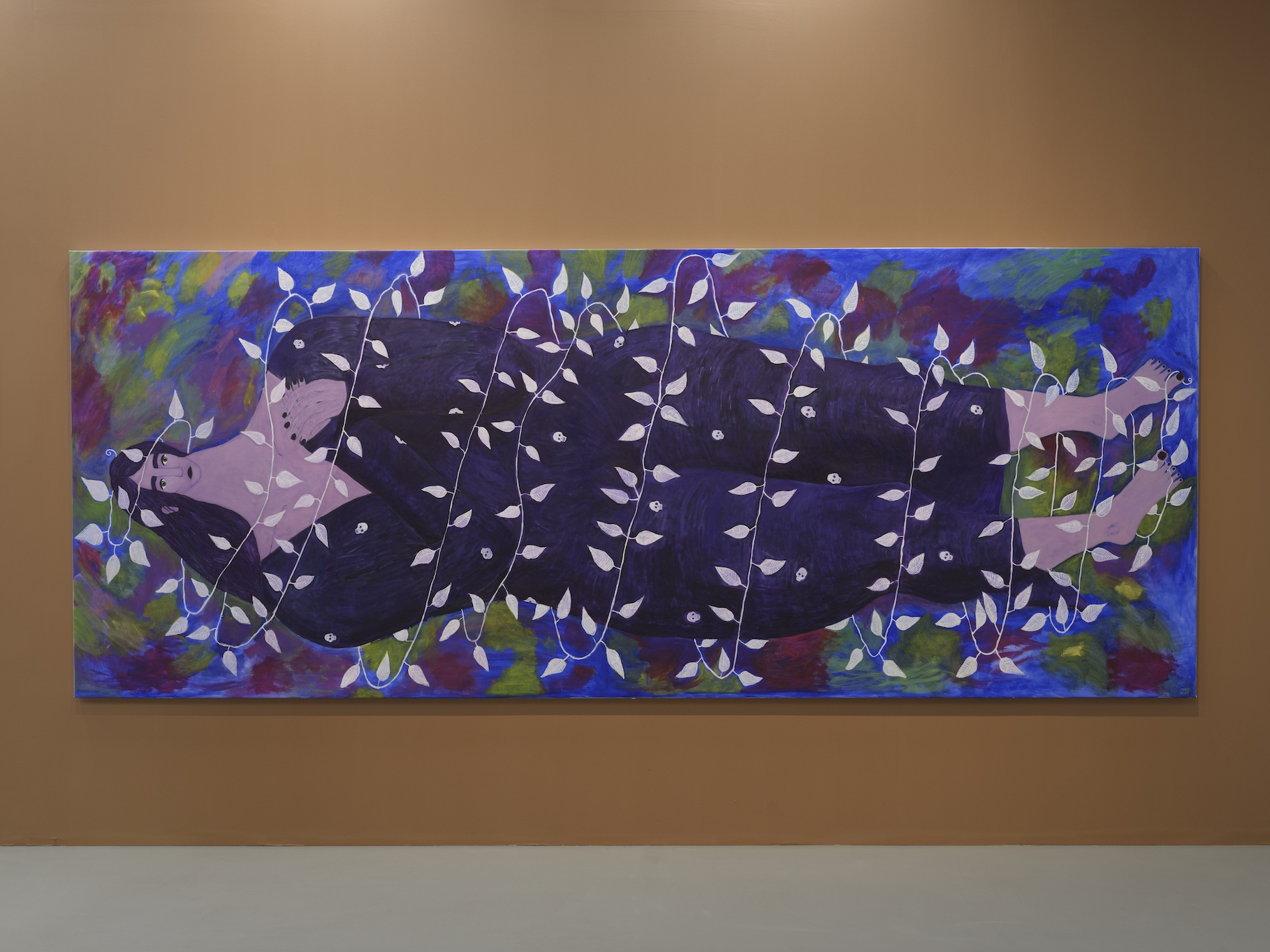 Negotiations between strength and fragility are consistent in Thorhauge’s works, a subtle dualism and a love of the equivocal unify in an expression that is as whole as it is underacted and challenging. The paintings look like considerate uncoverings of essential clashes, which are explorative rather conflict-ridden: encounters between life and death, something light and something dark, the beautiful and the ugly, love and loneliness, the masculine and the feminine, naivety and complexity.

With a confident sincerity Thorhauge ventures into the alphabet of clichés: naked people in nature, strong horses, and skulls, but behind the symbol-heavy pictorial language, fundamental re-thinkings can unveil themselves. Gazes directed at these androgynous bodies seemingly belong to the bodies themselves. The horses are peculiar beings rather than war animals.

In line with feminist thinker Donna Haraway’s theories about speculative fabulation – a notion of history writing imagining alternative worlds where patriarchy, violence, and demarcations of species are eliminated – Ida Sønder Thorhauge uses her open, curious figuration as a tool for analysis. She creates a form of speculative fabulation in the shape of images. Characteristic of fabulation is exactly how it produces a surplus of meaning enabling new interpretations of well-known objects, structures, truths.

Formal mythologies of figurative painting are punctuated in Ida Sønder Thorhauge’s work because she applies them with her eyes wide open. To be a female painter is to battle an art history that is always already dominated by men, but Thorhauge perseveres into this history, paints herself up against it, and makes it her own. She creates large-scale oil paintings with archaic motifs and so reclaims a representation that rarely sprouts from feminist thinking. When clichés are worn as jewelry they can be revived.

Ida Sønder Thorhauge (b. 1990, DK) holds an MA from the Jutland Art Academy (2016). She primarily works from a classical, figurative painting tradition. Thorhauge’s work has been exhibited in museums and exhibition spaces like Kunsthal Aarhus, Kunsthal Nord, Kunstbygning i Vrå and at Roskilde Festival, OK Corral, and the Nordic embassy in Copenhagen. In 2016 she was one of the founders of the artist collective Piscine with whom she exhibited in Denmark and abroad until 2018. She received a young artists’ studio grant from the Bikuben Foundation in 2018–19 and in 2020 she was selected for the Danish Arts Foundation’s two-year career development program ‘The Young Artistic Elite’. Thorhauge’s works have been acquired by the Danish Arts Foundation and the Visual Arts Council among others.